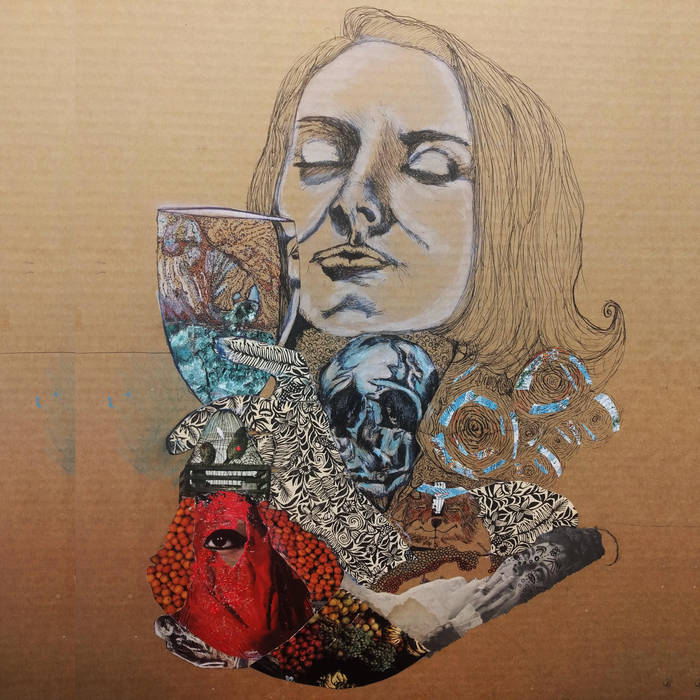 wonderdog With the singing a *bit* in the style of Richard Youngs and the backing containing a wide variety of found sounds, this is lovely record worth many listens.

"Back in 2012-13, Heidi Harris quickly won me over with a sequence of five home-recorded experimental folk albums on Reverb Worship and Inner Ocean, drawing on a remarkable personal archive of brittle, earthy soundscapes, spiderweb-delicate textures, and slyly memorable melodies sung in ghostly harmony. Since that initial flurry Harris has kept herself busy fronting Heidi and the 9 Feathers, but 'Cave Tides' marks her first solo album since 2013's 'Cut The Line'.

The resulting album - all 73 minutes of it - is a sprawling masterwork which seems to be broadly divided into three acts, With the opening half-dozen tracks containing no less than four proper old-fashioned songs, albeit in her uniquely fractured, spectral style, punctuated by clicks and buzzes and radio static and field recordings and Heidi's usual playfully understated palette of clarinet, cello, accordion and whatever else she has lying around. Two in particular, 'Further Adieu' and 'Bird & Beast', quickly remind me why I loved those early CDs so much; achingly pretty songwriting lovingly sabotaged with foggy, indistinct details that shroud the tracks like a half-remembered dream.

Just when you're getting comfortable, though, the album takes an unexpected left turn with 'Ancient Mariner', an evocative ambient piece with seagull chatter and hissing, trickling water sounds; squeaking, creaking drones, sinister xylophone twinkles accompanying a hushed spoken word recital of Coleridge's Rime of the Ancient Mariner. This marks the beginning of a series of intriguing experimental tracks, in 'Hollow of the Down' she plays about with a laid back jazzy drum groove populated with sinister synth drone'n'whoosh, hi-gain guitar and tentative echoed vocal details. The tracks in this section are broadly grounded with familiar instruments and simple, beautiful melodies, but the vocals are now far more textural and almost entirely wordless. Harris revels in taking us to slightly uncomfortable, unexpected places with an awkward intimacy that I'm not sure if I should read as dorky and funny or serious and artsy, and the mystery makes the journey even more compelling.

Finally we get to the final, and longest, act - the final three numbers give Heidi a chance to really stretch out with her soundscapes in two mammoth drone pieces, and gets the trap kit out for a second time in lighthearted interlude 'Autumn Eventide' between the two, acting as a palate-cleanser. The first long-form piece, 'Stolen Child', focuses on electronic ambience and field recordings with birdsong and echoed water drips scattered on a bed of patiently evolving drone-loops, a little bit Windy & Carl, a little bit Decimus, but with some of Harris's familiar clarinet establishing it's very much her own flavour. Closer 'Cave Tides Part 2' (Part 1 is an interlude slotted into the album's opening act) focuses more on the earthy physical tones; scratching and tapping textures; buzzing, grinding violin drones, and contains a lot more vocals, strange cooing harmonies that poke out in weird places, possibly electronically manipulated at times.

'Cave Tides' is a feast of unexpected ideas and delicious sounds that you'll keep struggling to get your head around, a unique and ambitious work full of seeming contradictions - it's experimental but heartfelt, it's playful but demands to be taken seriously. It's frustrating and delightful and perhaps at times impenetrably enigmatic, but that's part of what keeps me coming back to it. The album has an almost physical narrative of Harris moving beyond the comfort zone of her hazy Ela Orleans-esque sleep-pop and starting to venture into the territory of acts like Ashtray Navigations, NNCK or even Rain Drinkers, although whether this is symbolic of a literal change in her style or she just felt like the songs worked in this order remains to be seen."


》Parts of this album contain lyrics & titles inspired by:

And I made a rural pen,
And I stain'd the water clear,
And I wrote my happy songs
Every child may joy to hear...

... For the world’s more full of weeping than you can understand...

Where dips the rocky highland...
there lies a leafy island...
hid away, there we've hid away.
Come away, O human child!
To the waters and the wild.

... The ship drove fast... and southward aye we fled.
... the bird to slay that made the breeze to blow.

It cracked and growled and roared and howled.
Alone on a wide, wide sea
bird and beast.

Brian Bouchard - thumb piano/percussion
"And I Made a Rural Pen"

Heidi's creative practice is based on an exploration and intermingling of traditional and non-traditional sound sources.

..."a unique and ambitious work full of seeming contradictions - it's experimental but heartfelt, it's playful but demands to be taken seriously."

Bandcamp Daily  your guide to the world of Bandcamp

New sounds from Mavi, Ivy Sole & Moderator, plus AJ, the One joins the show, for her latest release